A few months ago, I was asked to design and illustrate the poster for the upcoming British Motoring Festival, a British motor event that includes not only cars, but other motorized vehicles. The poster celebrates the 50th anniversary of the MGB, which is, without a doubt, the world’s best-known sports car. 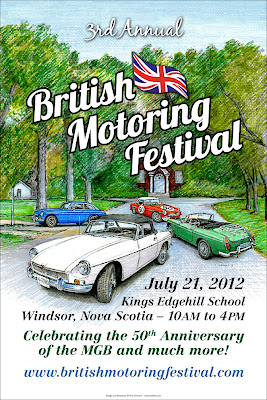 Well, the Festival is now on our doorstep, happening this coming Saturday, July 21st.

I’ll be there with my booth, showing off my art, doing some art, and signing the posters, which will be on sale at the event.

It’s being held on the lovely grounds of Kings Edgehill School in Windsor, Nova Scotia, starting at 10 am and wrapping up at 4 pm.

Please drop by if you make it to this wonderful event. Mr. Bean will even be there, carrying on with his Mini!
Posted by Automobiliart.com at 08:20 1 comment:

Over the past few years, I’ve followed a path of highlighting automotive motor sports history through my art. And all along the way, I’ve been blessed with meeting wonderful people … Nicolas and Dirk in Belgium, Jennifer and Stephen in USA, Lyndsay and Ralph in the UK, John in Scotland, Peter and Rob in Canada … 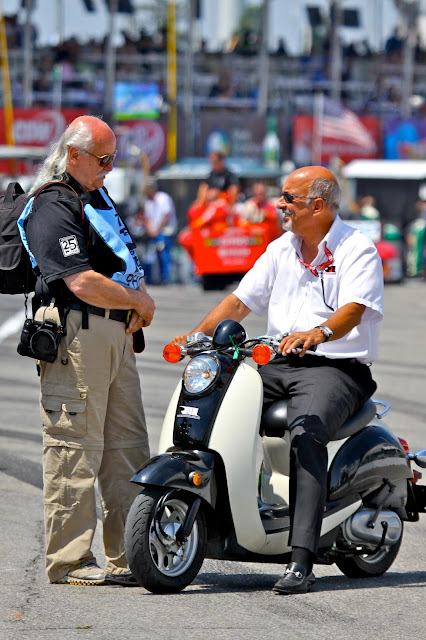 There are many many more, all of whom I can call my friends. Another one of those special people is sports and motor sports photographer Allan de la Plante from British Columbia, Canada. 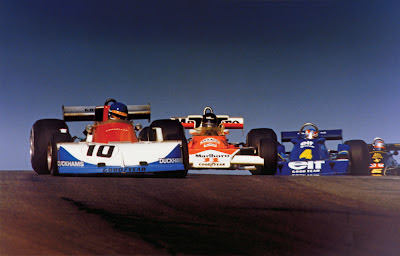 We connected a few years back, through a friend of a Facebook friend, and through his FB albums I became aware of his fabulous photography, and in particular, the wonderful photos of his dear friend Gilles Villeneuve.

On Monday evening, Allan was at the Halifax airport, a stop-over on his way to Newfoundland. He notified me of this, so my friend Alan Coles and I scooted out to meet him.

I have to say that it was to have Allan there in person … what a heck of a guy! It was like meeting an old friend for the first time! 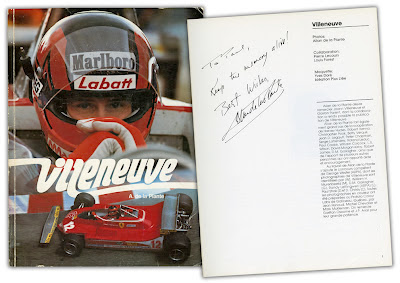 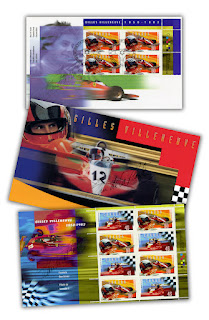 We had all but 10 minutes to chat, but Allan graciously signed my Villeneuve book and my Canada Post Villeneuve stamps, talked with pride about his old son’s forays into motor sports photography and golfing, and then told us 3 quick motor sports stories, none of which I can publish!

Now, I have a goal of meeting up with Allan again, and spending more time listening to one a greats of motor sports photography. Merci, Allan!
Posted by Automobiliart.com at 21:19 No comments:

At the end of the 1940's, Jaguar the car company decided to enter the world of racing, fielding their successful XK 120 sports car. And they went after one of the biggest motor sports, the 1950 24 Heures du Mans. Unfortunately, clutch failure ended their quest.

For 1951, they created a lightened, rebodied version labeled the C-Type, and succeeded. Their C-type won again the prestigious race for 1953. 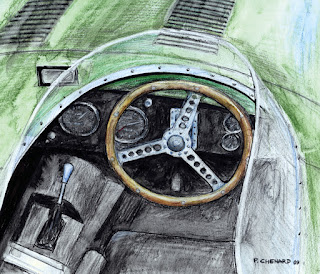 The company continued with the development of other racers, but with little success.

In the early 1980's, Tom Walkingshaw Racing (TWR) took a Jaguar XJS to a win of the 1984 European Touring Car. With this success, Jaguar decided to get officially back to racing.

With company support, TWR developed the Jaguar XJR-6 for the 1987 season, and it finished 5th at Le Mans. With their other successes in the season, Jaguar won the World Sports Car Championship. 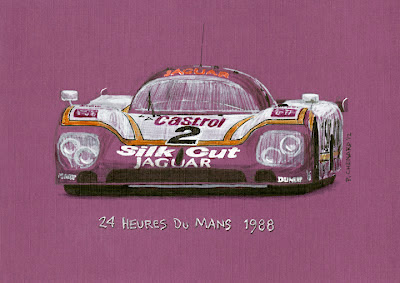 Thirty-one years after their previous Le Mans victory, Jaguar was finally in the winner’s circle again.
Posted by Automobiliart.com at 20:23 2 comments:

On June 23rd, I had the opening of my very first gallery show! 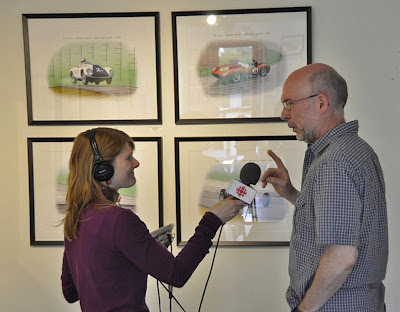 I was interviewed by Radio-Canada's arts reporter Nathalie Geddry.
All photos © Alexander Henden 2012

Thanks to friend and organizer Alex Henden, my show took place in the lovely Pavia Gallery – Expresso Bar & Cafe. 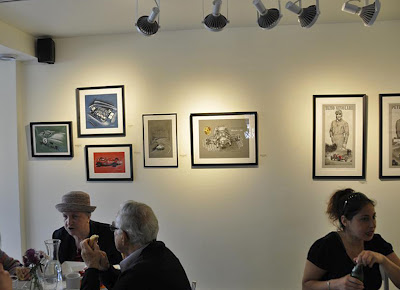 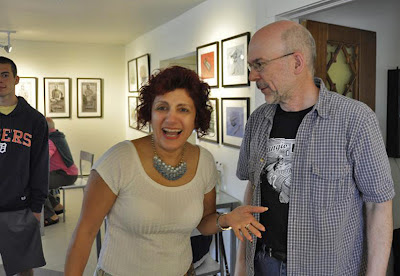 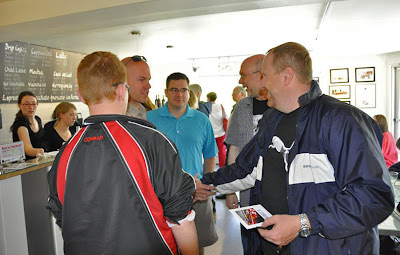 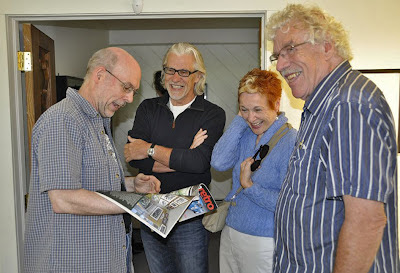 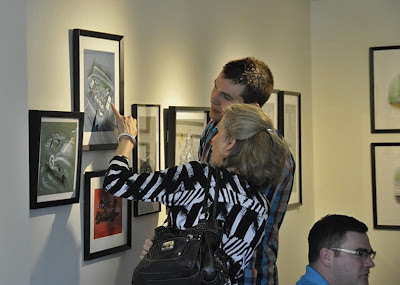 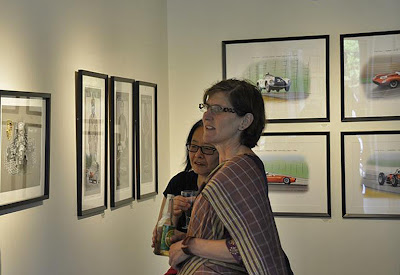 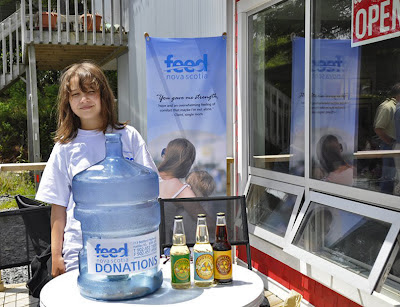 Alex and Chris had also made the gallery opening a fundraiser for FEED Nova Scotia ... Bravo!

It was a wonderful, well attended opening on a beautiful Father's Day. Friends and family showed up, along with car lovers, art lovers and lovers of Italian food ... and the coffee and food there are fabulous! 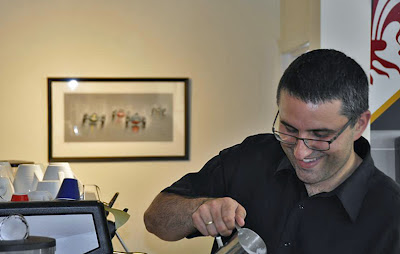 Artist, chef and gallery-owner Chris Webb doing some of his Espresso art. 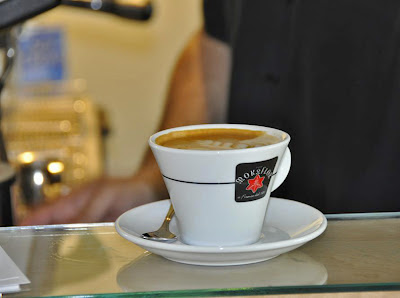 There was some lovely eye-catching rolling art sitting in the parking lot too. 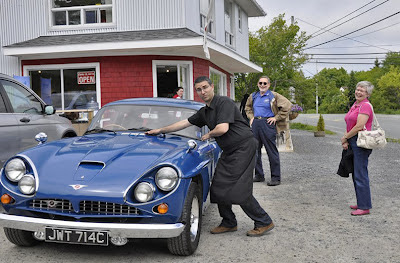 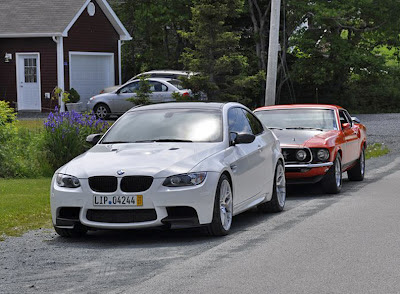 My show continues through till July 7th.
Posted by Automobiliart.com at 11:13 No comments: