Matra was a high-tech French company involved in aeronautics and weaponry.

In the mid-1960's they diversified into automobiles by purchasing Automobiles René Bonnet with the specific goal of raising their public profile by building sports cars and race cars.

They took the plunge into Formula 1 in 1968, developing the the Matra MS10. The team was run by Ken Tyrrell, with Jackie Stewart (Scotland) as driver. Amazingly, Stewart found three wins in the new racer and finish in second place in the Championship. 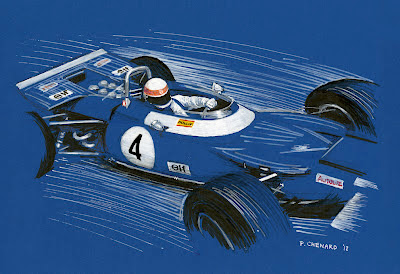 Original art available, as are limited editions.
For the 1969 Formula 1 season, Stewart started again with the Cosworth-powered MS10, winning the first race of the season in South Africa. Afterward, he switched to the new Cosworth DFV-powered MS80, which carried overall improvements over the previous Matra. Stewart won the Spanish, Dutch, French, British, and German Grands Prix and easily took the first of his three Championships.
For 1970, Matra joined Simca (Chrysler). With Tyrrell's major support coming from Ford, sponsorship conflicts ended the Tyrrell/Matra relationship. At the same time, FIA specification changes ruled out the MS80.

Jackie Stewart loved to race the MS80, saying it was beautifully balanced and stable at speed, qualities he used effectively to win.
Posted by Automobiliart.com at 17:51 3 comments:

It’s probably not the place you’d think of trying to sell racing history art, but there are many artists selling there, and they say that, past this rather more quiet time, they do quite well at the market.

I’ve had good weekends and bad weekends financially, but I have to say that I have zero competition, and I’ve enjoyed my time there. I occasionally even have time to do some sketching, like this past weekend; I managed to get two little sketches done. 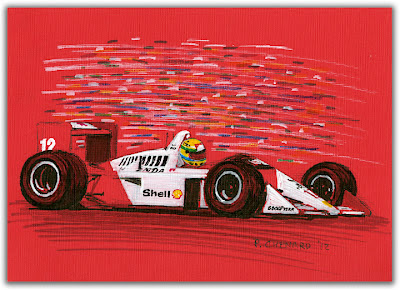 The visitor’s reactions range from curiosity to slack-jawed shock! In the 4 weekends that I’ve been there, I’ve already developed a following. In fact, I believe I’ll get a few commissions from being there. 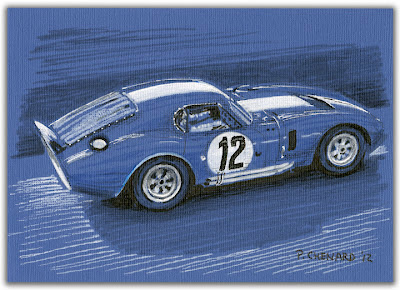 It’s a good way get known by the local racing fans too!
Posted by Automobiliart.com at 12:55 No comments: