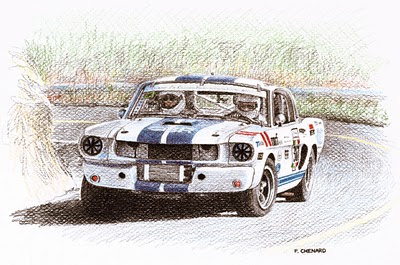 Enzo Ferrari was looking for an advantage over the sleek machines of Mercedes and Auto Union at the Formule Libre race at Avus in Berlin on May 24th, 1934. 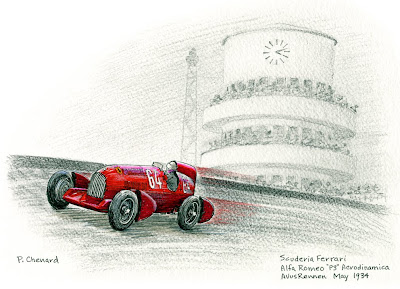 Pen&ink, markers and pencil on white archival stock 12"x 9"
© Paul Chenard 2010
Original sketch available, as is the limited edition.
The banked Avus track was known for it’s high speed, so Ferrari commissioned Cesare Pallavicino from the Breda Aircraft Company to design a streamline body for one of the Alfa Romeo P3’s. “Guy” Moll would drive this special “Aerodinamica” for Scuderia Ferrari.
Before the race, the Mercedes W25’s were withdrawn with fuel pump problems. With rain falling at the start of the race, the Auto Union Type-A of Hans Stuck quickly took the lead.
As the rain stopped and the track dried, Moll started catching the leaders. He passed teammates Varzi, then Chiron, who later dropped out with a broken oil pipe. He then took the lead from Stuck, who lasted only two more laps before his clutch failed.
With almost a minute and a half lead over the second place Varzi, Moll took the race, much to the chagrin of the Stuck’s hometown crowd.
Sadly, this fine driver lost his life at the Coppa Acerbo in August of the same season.
Posted by Automobiliart.com at 08:43 No comments:

The Stutz team racers have the advantage on the steeply-banked wooden track.

I did this sketch on the packaging for an artwork purchased by a collector in California. 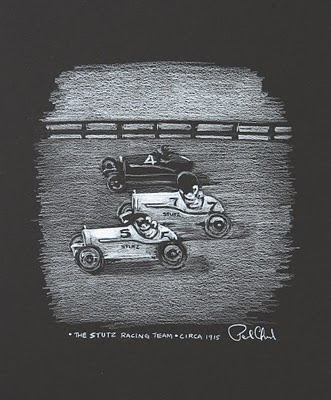 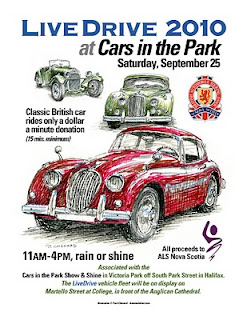 I designed this poster using my illustrations to promote a fundraising event for the ALS Society. The event is organized by the British Automobile Touring Association of Nova Scotia and run by volunteers.


I did these illustrations at the British Motoring Festival; they represent a 1937 HRG, a Jaguar Mk IX sedan, and a Jaguar XK150 FHC.

Posted by Automobiliart.com at 12:28 No comments:

In the squeaky-clean, high-security paddocks of todays Formula 1 teams, it's easy to forget that it wasn't always so ...
While preparing the Ferrari 312B's of Scuderia Ferrari at the 1971 Spanish Grand Prix, the race car technicians were working in a dirt paddock, open to the elements, and the occasional curious local. 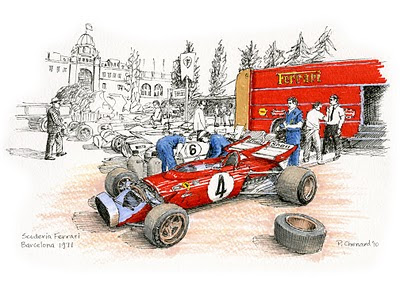 The car in the foreground was Belgian driver Jacky Ickx's mount, in which he finished in second place behind Sir Jackie Stewart driving a Tyrrell-Ford.
Posted by Automobiliart.com at 12:39 1 comment: