A few months ago I was invited to submit my art to be reviewed for inclusion in the book Nova Scotia Contemporary Artists Volume II.
Well, my art was accepted, and the book is being officially launched this coming Saturday, December 4th, from 2pm to 4pm at the Art Gallery of Nova Scotia. 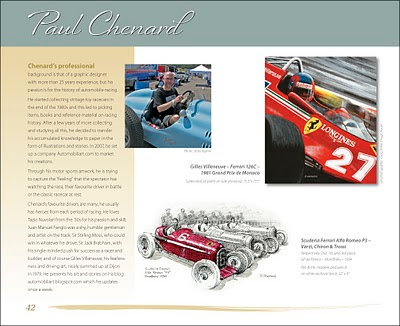 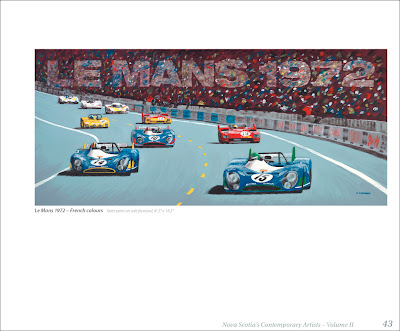 It’s a huge honour for me to be included is this high-quality publication full of such wonderful artists.
I can safely say the mine will be the only automotive racing history art in that book.
Posted by Automobiliart.com at 21:58 2 comments:

Are you looking for something special for that someone special?
Captured stories of racing history have always rated high on my wish list.Here is a selection of my art available as signed numbered limited editions; some originals of these are also available.
My limited editions are printed as premium archival Giclee prints, the best printing available.
Here is a small selection of them … Enjoy! 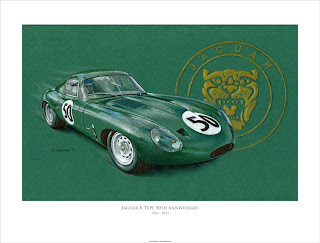 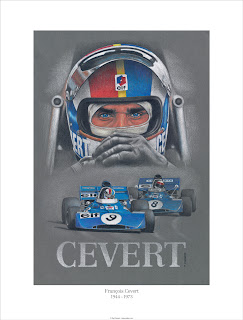 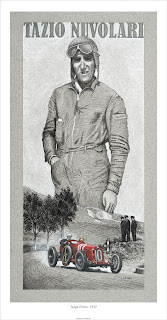 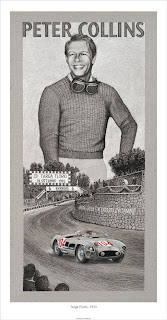 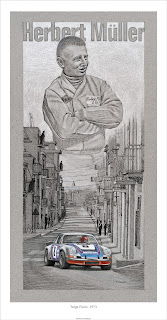 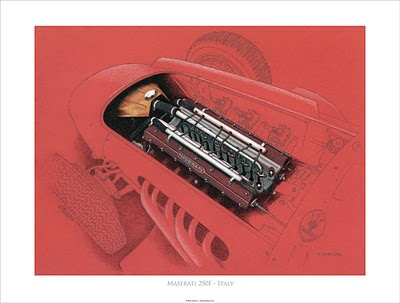 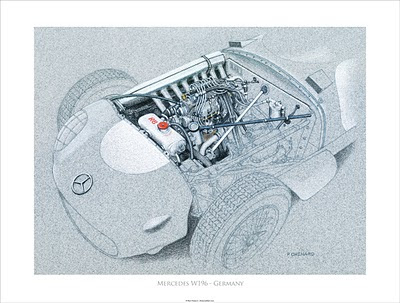 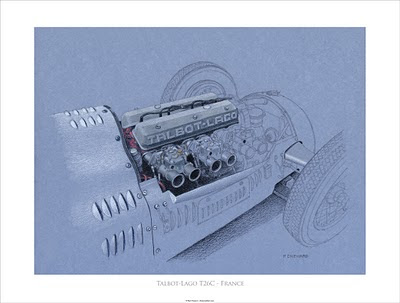 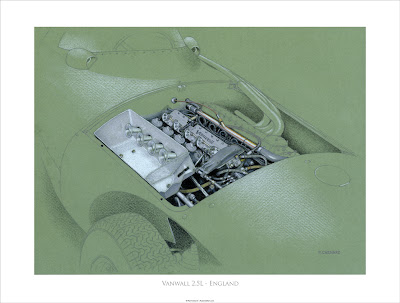 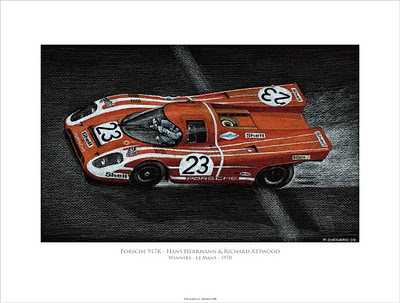 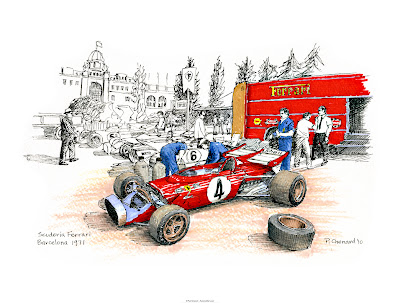 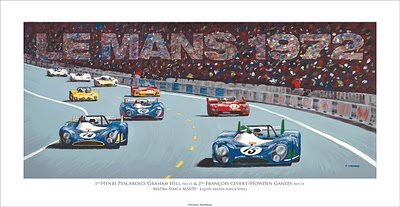 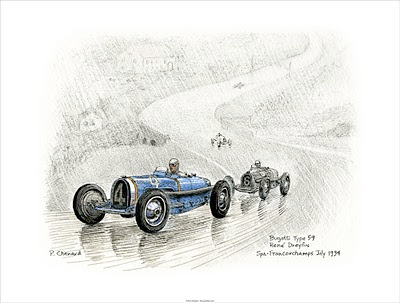 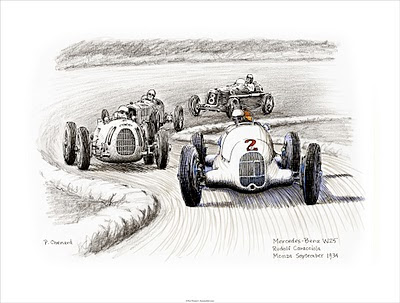 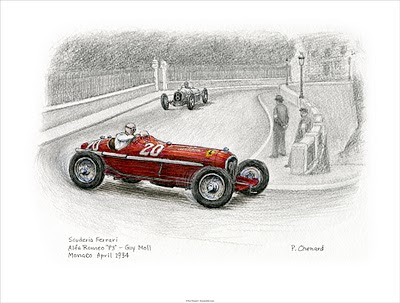 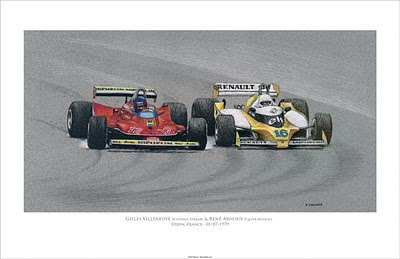 At the Nurburgring track, bad weather delayed this important race by a few hours.


Mercedes-Benz was making its first official entry into the Grand Prix season at this event after extensive testing and adjustment of the new W25.
Team manager Alfred Neubauer was feeling the pressure to succeed in their homeland. Their star driver had not yet fully recovered enough from his 1933 Monaco crash to participate so Mercedes brought in a new driver Manfred Georg Rudolf von Brauchitsch, along with Luigi Fagioli to drive their new racer. 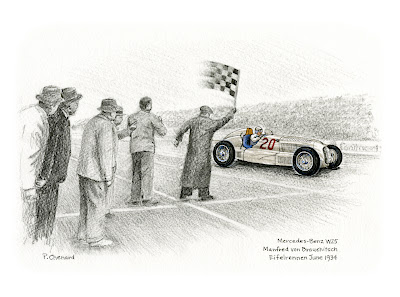 Pen&ink, markers, and pencil on archival white stock 12”x 9”
© Paul Chenard 2010
Original art & limited editions available.
Auto Union had Hans Stuck, Hermann zu Leiningen and August "Bubi" Momberger to drive their Type A.
Scuderia Ferrari had Louis Chiron and Mario Tadini driving the Alfa Romeo P3. Bugatti had no entries in the race, and nor did Maserati.
Three classes of cars were racing together, flagged off one class after another, a total of forty-four cars in all.

Italian Fagioli took an early lead until he was ordered by team manager Neubauer to let his German teammate von Brauchitsch by. Later in the pits for fueling, Fagioli argued furiously with Neubauer over this. He started off again, but with only one lap remaining in the race, he pulled over and abandoned his race car in protest.

With two Auto Unions out of the race, Stuck had taken the sole remaining Type A to a sizeable lead over von Brauchitsch. Some believed he would go non-stop and win the race. He finally did have to come in for fuel and tires, and the Mercedes driver took the lead, which he would keep to the checkered flag.
The win was a stunning debut for both the Mercedes-Benz team and their new driver.
Posted by Automobiliart.com at 18:18 No comments:

1955 was a very big year for racer Sir Stirling Moss.

The Mercedes-Benz racing team had recruited him because of his strong placings in previous years in all classes of racing cars.
That year, he had won the grueling Targa Florio sports car race with teammate Peter Collins, and the very long and dangerous Mille Miglia with navigator/journalist Denis Jenkinson.

He was also driving the Mercedes-Benz Formula 1 cars in which he won his first Grand Prix race, the British GP at Aintree on July 16th, ahead of his illustrious teammate Juan Manuel Fangio.
He would finish in second place in the season, and also in the following three seasons.
The above new 22”x 7” limited edition archival Giclee print is available to celebrate Sir Moss’ first Formula 1 win; you can order it by emailing me at paul.chenard@hotmail.com
Posted by Automobiliart.com at 13:33 1 comment: 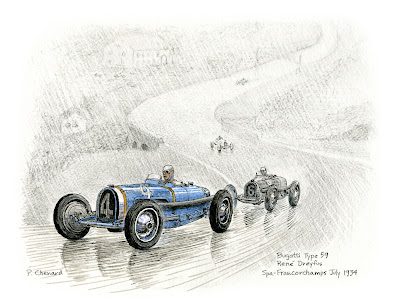 
Raymond Sommer was the only Maserati driver present, so that the real race was going to be between the Scuderia Ferrari Alfa Romeos and the Bugattis.
As the typically rainy race began, Louis Chiron took the lead in the Alfa Romeo, with the Bugattis pitting with fouled plugs.
It looked very much like another Scuderia Ferrari win in the works. Unfortunately, Chiron’s racer slid off the track and overturned; he was luckily uninjured in the incident.
Achille Varzi took comfortably over his teammate’s lead, and at the same time, the track record. This was not to last, with his smoking Alfa Romeo coming in with a blown engine.
With their only real opposition out of the way, the Bugattis of René Dreyfus and Antonio Brivio cruised in first and second, with Sommer a distant third for Maserati.
It was to be one of the very rare top-level wins for Bugatti in 1934.
Posted by Automobiliart.com at 08:39 2 comments: