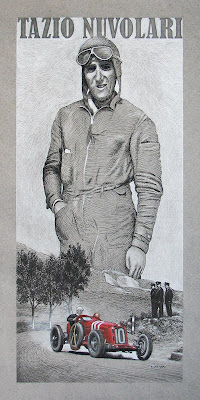 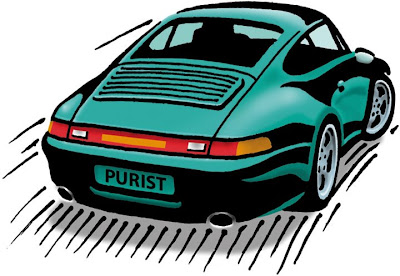 In the Fall of 2008, I had the great pleasure of connecting with gentleman in Massachusetts who has a website (993C4S.com) dedicated to Porsches and Porsche lifestyle and culture; it’s a really good read, and a great source of information.

As we connected more and more, he asked me to develop a new logo for his site, based on rebranding it to reflect his ever-expanding audience. He wanted the logo to be more illustrative than iconographic, reflecting the style I used on my Phil Hill series of prints. I also developed the accompanying typography.

The refurbished site is now called Porsche Purist, again to reflect on his growing market. This project was great fun, and very proud of the results. Make sure you make this site part of weekly web intake!
Posted by Automobiliart.com at 11:30 2 comments:

Porsche AG entered into racing in 1951 with a modified 356 Coupé but their first fully purpose-built racing car came in 1953 in the form of the 550 Spyder.

The first major win for the updated 550A came at the 1956 Targa Florio, driven by Umberto Maglioli. The 550A was further developed into the 718 RSK, another successful winning racer.

These wins by the light small-displacement Porsche race cars against large-displacement 12-cylinder racers such as Ferraris gave them the reputation as “Giant-killers”.

For 1960, Porsche introduced the RS60, a further development of the RSK. Like the RSK, it sported sleek light-weight aluminum bodywork, a low center of gravity and a mid-engine layout. The 4-cylinder, 4-cam engines used were either 1.5 litres (150bhp) or 1.6 litres (160bhp). With a weight of less than 1,300 lbs, the RS60 was very nibble indeed!

For the 1960 season, the FIA stipulated that sports racing cars match more closely the specifications of production sports cars. The racers had to sport a full-width windshield with a minimum height of 25 cm, a luggage compartment and a streamline fairing behind the driver’s head.

The RS60 was very successful out of the box, winning the 12 Hours of Sebring in the hands of Olivier Gendebien and Hans Hermann, followed by Porsche’s third Targa Florio win in the hands of Jo Bonnier, Hans Hermann and Graham Hill. It also won the European Hill Climb Championship.

In 2007, Porsche introduced the special edition Boxster RS60 in homage to the great racer. 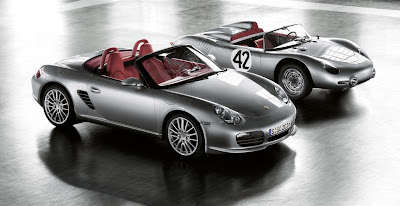 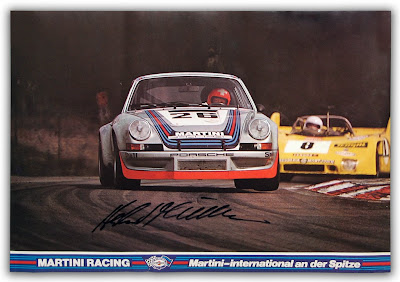 This poster is part of a collection of racing automobilia gifted to me by my friend Peter Felder. It's autographed by his good friend Herbert Muller.
Posted by Automobiliart.com at 15:23 No comments:

When my son Laurent and I were at the 2007 Mosport Vintage Racing Festival, we met a lot of great people. One of these was Peter Felder from Ontario. And since we’ve met, we have become good friends. 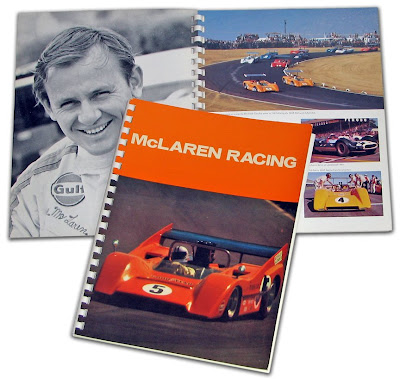 Peter used to be part of some major racing teams from the 60’s through to the 80’s, and along the way, accumulated a lot of “stuff”. 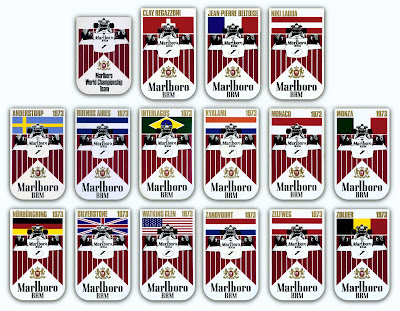 A few months ago, Peter was clearing out his attic, and asked me if I was interested in having some of this “stuff”. Of course, vintage racing addict that I am, I said yes. 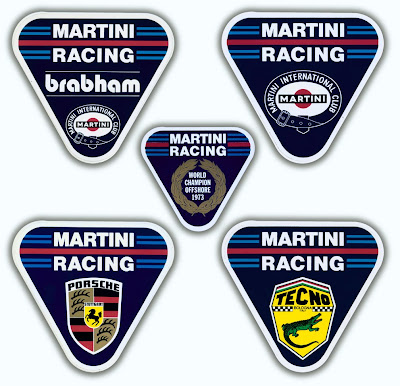 Just before Christmas, a large box arrived, and when I opened it, I was completely shocked. Peter had generously filled it to the brim with amazing items: photos, stickers, tags, patches, posters, some of which were autographed, race programs, corporate brochures, and press kits, all covering Formula 1, Formula 2, Formula 5000, Can Am, Trans Am and Sports GT racing, from Watkins Glen to Hockenheim.

Over the next few months, I will be posting some of these items, and adding them to my vintage racing automobilia collection site.

Enjoy!
Posted by Automobiliart.com at 14:19 3 comments: