The McLaren M8F that never was ... follow-up!

Since reporting on Peter’s (Revson) replica McLaren M8F team car, I’ve received a windfall of support and information from all over the world. It’s as if an invitation to a party went out, and an army consisting of motoring journalists, historians, vintage racers, engineers, mechanics, car collectors and race enthusiasts showed up at my door, rang the bell, handed me lovely gifts and exclaimed: “Surprise!” Some were friends, others were friends of friends, but all were genuinely interested in helping me as much as they could. What began as a personal responsibility to straighten out the confusion and unseemly misrepresentation of one of my brother’s more important rides, has instantly transformed into a broader theme which I hope will benefit others. 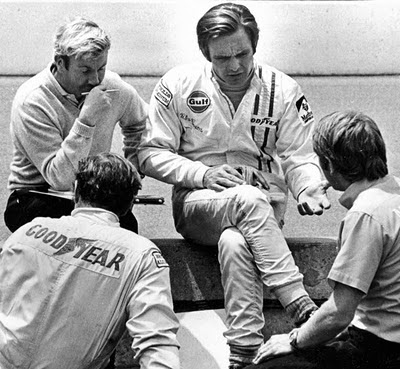 Among the tremendous amount of data that came to me, were close-up photographs identifying distinguishing features between Peter’s and Denny’s (Hulme) team cars, team cars and customer cars, and a fully documented ownership history, with relevant details, from the time the car left McLaren to the present. 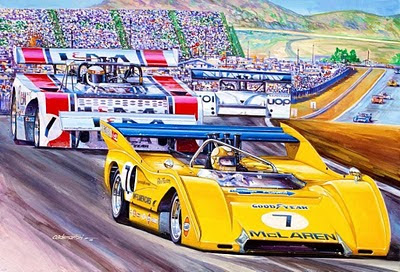 The quickest way for a novice to tell Peter’s car from Denny’s, which I wish I’d remembered last summer at the Monterey Historic Races when the poseur emphatically declared his car to be the real deal, is by the shape of the air box. Peter’s car has a narrower opening with two round holes on either side, while Denny’s is wider and flows into a continuous wing shape. That in itself makes the replica team car a poor copy, since it’s air box favors Denny’s car not Peter’s. But, what really piqued my interest was seeing pictures of the noticeably different rivet sizes and patterns located on the rear bulkhead of the team cars, versus the customer cars. Team cars have pop rivets measuring 5/32” that are staggered 1” apart. Customer cars have 3/16” rivet holes staggered at 2” apart. Like I said, noticeably different. Another picture of interest showed the team’s stainless steel pickup points up front, measuring approximately 3 1/2” x 7” long, which the customer cars did not have.

Assuming the role of chief detective to eliminate this despicable hoax was all consuming, but extremely satisfying. On one especially triumphant day, l actually felt quite giddy. For a solid week, my Mac and I never left each other’s side, save for a quick trip to the store and back. By the eighth day, I’d gathered up all the previously disassociated puzzle pieces that had languished for decades, fitted them back together, and found that the most important people involved came out ahead. A splendid outcome I’d never have achieved without the many friends who came to my aid. My sincerest thanks to all of you for helping me preserve Peter’s Can-Am history. 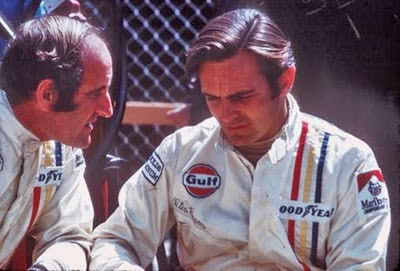 As for what appears to be a blatant case of fraud, I’ve notified the true owner of Peter’s Can-Am Championship McLaren M8F and will leave the rest to him.
Jennifer Revson, sister and legal representative for the estate of the late Peter Revson
Posted by Automobiliart.com at 12:30

Outstanding! I'm glad to have been able to help in my own small way.

On top of it all, I have learned a lot about the history, the cars and most importantly made a couple of new friends.

Great job!! I know the hours you put in and for a very good reason. We all learned a lesson, do not take things for granted and if something is wrong, than fix it the best you can.

This is much more common than most people think!!!

Imitation is not always the sincerest form of flattery. It's good to know that you have a large, caring group of friends with a tremendous body of knowledge and personal experience to draw on upon to help set the record straight. Now that the facts are in the open, the truth can prevail. It's a pity that you have to maintain such vigilance to keep your brother's name and memory unsullied.

See you at the races!