For the 1956 Formula 1 season, Scuderia Ferrari was fielding the Lancia-Ferrari D50’s that that they inherited from Lancia when they folded their racing efforts. 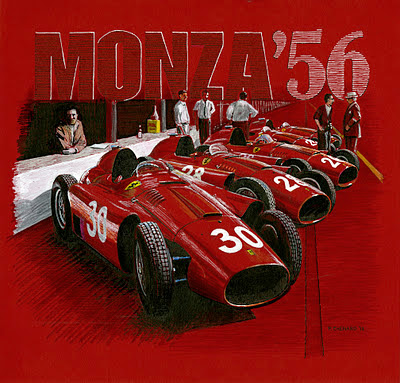 Before the Italian Grand Prix, the last race of the season, Fangio had 2.5 wins, Sir Stirling Moss had 1 win, Collins had 2 wins, Pat Flaherty had 1 win, and Musso shared a win with Fangio.

Points-wise, it was a very close match-up between Fangio, Collins and Moss, with all 3 having a good chance at winning the World Championship into that last race at Monza.

During the race, the Monza track, with it’s steep banked section, took it’s toll on the Ferraris, with the D50s of Castellotti, Fangio and Musso dropping out. 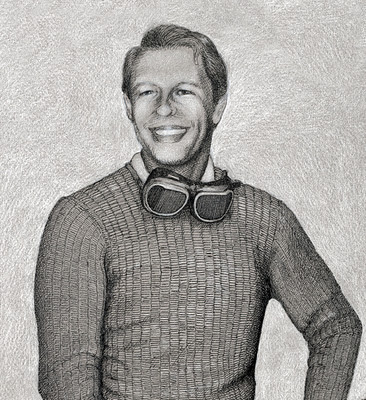 When the remaining D50 of Collins came in for a pitstop, he spotted Fangio there, and immediately hopped out of his car to hand it over to Juan Manual so he could get back into the race. Fangio came in second place behind Moss, giving him enough points to take the Championship.

When he was asked why he so unselfishly gave up his car, thus his Championship chances, Collins said that he thought that Fangio deserved it more.

Spoken like a true gentleman!
Posted by Automobiliart.com at 09:46

Can just imagine one of today's Grand Prix drivers handing their car over to a team mate to take the title. How times have changed.

Hi Art
Thanks for commenting.
I guess this illustrates why I love the history of Grand Prix racing, and find very little that is human or interesting in today's Formula 1 racing.