Porsche’s development of their sports racing cars through the 1960’s took leaps and bounds, bring serious challenges to both Ford and Ferrari on the track.

Ford dropped out of the battle once they proved their point at Le Mans, and Porsche was very ready to take up the battle.

As they developed their racing technologies, they looked into ways they could be adapted to the competition versions of the 911.

With the great success of their Porsche Carrera RSR in 1973, they saw that the next logical step was to turbo-charge it. 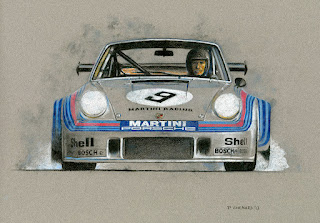 Born from this approach, the 1974 Carrera RSR Turbo was a formidable monster. Turbo-charging made it powerful, but turbo-lag made it scary.

Drivers like Herbert Müller and Gijs van Lennep managed to tame it and it achieved measured success, but it became a major development tool to Porsche’s successful 934 and it’s all-conquering 935.
Posted by Automobiliart.com at 14:51 1 comment: Links to this post

After the relative success of the Porsche 911 in competition, Porsche saw opportunity to bring it into higher levels of racing.

Starting with the 911S, the technicians developed a lightened car, and focused on increasing the capacity of the flat-six engine.

Out of these developments came the non-turbocharged Carrera RSR 2.8 created to compete in the 1973 GT Championship.

Right out of the box, the car showed huge potential, winning the 1973 Daytona 24 Hours at the hands of Peter Gregg and Hurley Haywood.

This was followed up by a win of the 12 Hours of Sebring, driven again by Gregg and Haywood, joined also by Dave Helmick. 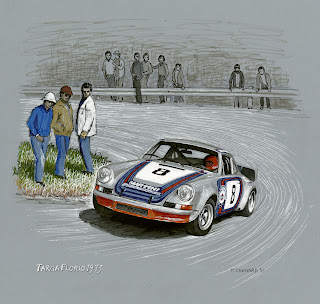 With the record of important wins and high placings of the Carrera RSR, Porsche took the GT Championship.
Posted by Automobiliart.com at 10:05 No comments: Links to this post

31 years ago today, Formula 1 lost one of its most impassioned and exciting drivers, one we will never forget … 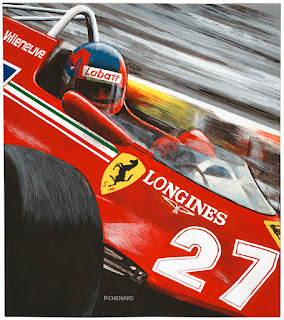 “… in equal cars – or sometimes in a lesser car – when I want someone to stay behind … I think he stays behind.”
Posted by Automobiliart.com at 06:47 No comments: Links to this post