James Dean and his Porsche 550 Spyder

He is known mostly for the brilliance of his acting in his only 3 feature movies: East of Eden, Rebel Without a Cause, and Giant. He received two posthumous Best Actor Academy Award nominations, for East of Eden and Giant.

He is less well known for his automobile racing activities. In 1953, he started with a race-prepared MG TD, then trading up to a Porsche 356 in 1954.

He showed some skill on the track, so he again traded up to a Porsche 550 Spyder. He had actually ordered a Lotus X for his racing activities, but its delivery was delayed so Dean settled on the Spyder.

His language coach for the movie Giant, Bill Hickman, called him “Little Bastard”, so Dean had that painted in script on the back of the Porsche by legendary pin-striper Dean Jeffries.

On the morning of September 30, 1955, Dean and his mechanic Rolf Wütherich set off from Competition Motors in Los Angeles to go to a sports car race in Salinas, California.

On their way there, a 1950 Ford Custom Tudor coupe, driven by 23-year-old Donald Turnupseed, took a fork in the road, his left turn bringing him head-on into the path of Dean’s Porsche.

Wütherich survived the crash, but Dean was not as lucky and died about 10 minutes afterward.

Interestingly, he was quoted as saying, "People say racing is dangerous. But I'd rather take my chances on the track any day than on the highway."

Sadly, he was right. 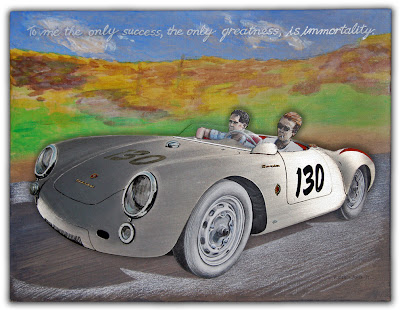 Artwork
For the past little while, I've wanted to do a piece on James Dean and his 550, so finally I got around to it. I call it "Immortality", and it's done in mixed media.

The background is acrylic on 70 year-old unused canvas board (my dad's), Dean and his mechanic are in pen&ink and archival markers on illustration board, on which I also illustrated the wheels in Prismacolor pencils.

The Porsche 550 Spyder is on 18-gauge sheet aluminum, which I engraved, sanded, painted on with oil model paint and pen&ink, cut out, filed and sanded, and finished in gloss varnished. The Porsche is about a 1/4" off the canvas ...


This piece is is available for sale; please contact me at paul.chenard@hotmail.com  if you are interested.
Posted by Automobiliart.com at 12:41

Thanks Rick.
Actually, when people see it (in the flesh), their reaction is very interesting ... a bit of shock and surprise. They move from one side to the other and back because of how the light hits it and makes the flat aluminum sheet look rounded and 3D. It changes depending on where you view it. I'll certainly try more like this ...
You should drop in to see it.
Cheers!