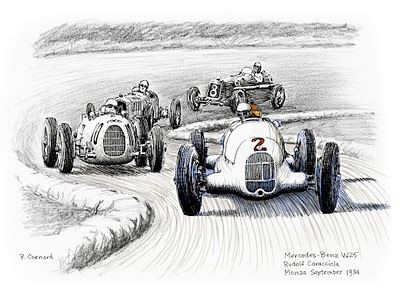 Pen&ink, markers, and pencil on archival white stock 12”x 9” © Paul Chenard 2010
Original art & limited editions available.
At the start, Hans Stuck took an early lead for Auto Union but was soon overtaken by Mercedes driver Rudolf Caracciola. His teammate Manfred Georg Rudolf von Brauchitsch was not competing, having been injured in a crash at the previous Swiss Grand Prix. Battling amongst the leaders were Luigi Fagioli (Mercedes), Archille Varzi (Alfa Romeo), Nuvolari (Maserati) and Count Carlo Felice Trossi (Alfa Romeo).
Unfortunately for Nuvolari, the Maserati mechanics forgot to top-up his car's brake fluid after weigh-in, so he slowly lost his brakes during the long race.
The 4.75 hour race, with it’s 1600 total corners, took a toll on the drivers and the cars. Fagioli, whose car broke down, later replaced Caracciola, who had to be lifted out of his car. Stuck had to be replaced by zu Leiningen, and Trossi by Comotti.
Varzi dropped out with mechanical woes, so the race finished with Caracciola/Figioli in first place, Stuck/zu Leiningen in second, with Trossi/Comotti in third. After 4th place Chiron (Alfa Romeo), Nuvolari finished a respectable 5th place, using his gears to brake for the last half of the race.
Posted by Automobiliart.com at 08:32

Excellent drawing Paul ! Those races back before WW2 must have been real tests of man and machine, what driver would ever willingly give up his seat if he did not have to ?

Thanks very much Art!
Caracciola was severely injured in the previous year's Monaco Grand Prix during practice, and was still in recovery for this race. The marathon drive was too much for him, and he was almost passed out in pain when he pulled into the pits. Fagioli's car had broken down, so he willingly took up the challenge.
Cheers!