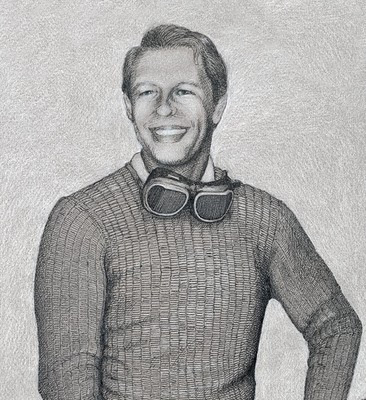 Pen&ink and Prismacolor pencil on steel gray archival stock
© Paul Chenard 2010
Born in 1931, he started racing Formula 3 Coopers in 1950, and quickly moved up to Formula 1 in 1952, driving for HWM. He also drove for BRM, Maserati and Vanwall. 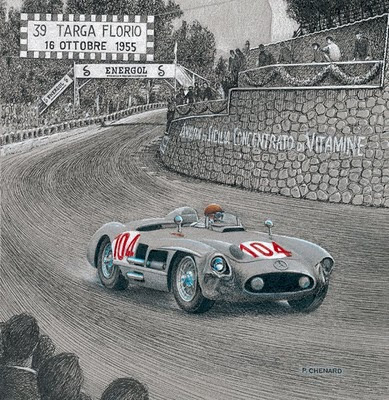 In 1955, He joined Sir Stirling Moss to win the prestigious, but grueling 277 mile (445 km) Sicilian Targa Florio open-road race, driving for Mercedes in a 300 SLR.

Scuderia Ferrari hired him in the 1956 season driving in F1 and his first win with the team came at the 1956 Belgium Grand Prix. Collins found more success during the season, and was well on his way to possibly becoming the first British F1 Champion.
At the 1956 Italian Grand Prix, the last race in the season, his teammate Juan Manuel Fangio’s Lancia-Ferrari broke down, so Collins selflessly handed over his car to Fangio, who also had a chance at the Championship. This enabled Fangio to finish the race in second place, giving him enough points at the end of the season to win his 4th F1 World Drivers Championship.
This great act of generosity gained Collins immense respect in the eyes of fans, the motoring press, and Enzo Ferrari himself. 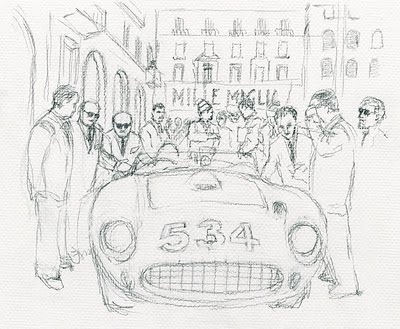 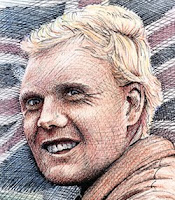 In 1957, Mike Hawthorn joined him on the team, and they became fast friends. Collins married American actress and racer Louise King, proposing to her on their second meeting.

Tragically, this well-liked driver was killed while racing a Ferrari 246 F1 at the 1958 German Grand on the Nürburgring. Hawthorn was so badly affected by the death of Collins, that he announced his retirement after taking the 1958 F1 World Drivers’ Championship.
Posted by Automobiliart.com at 19:26

Sir, your knowledge of the history of sports car racing is matched only by your ability to recreate it for us. Thanks, Paul.

Dear Jeff
Thanks so much for your comment ... I'm trying!
Cheers!
paul

interesting drawing of collins ferrari at the piazza della vittoria in brescia,paul
i've got that picture and was always tempted to paint it...you've just wetted my appetitte

Hey Rob
Thanks for checking in ... that Klemantaski shot of Collins is really great. Nicolas Cancelier has done a piece on it too. He sourced it from the same French book as I did!
your work is fabulous, as always ...
Cheers!