Legends of Riverside — An Event to Remember!

A story by my friend Rick Rucker
For the last three days, I have been at the "Legends of Riverside" film festival and get together. Ostensibly, as the name suggests, the avowed purpose was to bring together several drivers that raced at the long closed Riverside International Raceway, in Riverside, California. 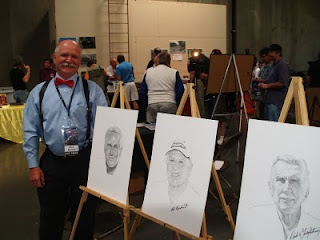 Artist Rick Rucker
The booth where I was displaying my drawings was in the building across from the main venue, where all of the film presentations were going on. I made it over to the other side to eat (extremely good food) and to talk to some of the racers, but mostly stayed in my booth. 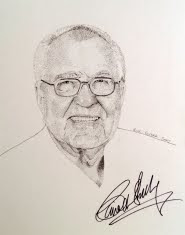 Portrait of Carroll Shelby © Rick Rucker
Saturday afternoon, we were suddenly inundated by people, streaming in the through the doors. I looked at the proposed itinerary, and saw that it was time for the autograph signing. The volunteers brought in two long tables, and placed them end to end. The idea was to have the people that wanted to have items autographed, walk down the table, stopping at each driver's "station" to get a signature. The caliber of drivers in attendance was stunning! Several won races, and championships, in more types of races than today's racers would ever consider attempting. I don't mean to slight anyone, but if you were to look in a book that listed famous racing drivers, most of them were at this event! 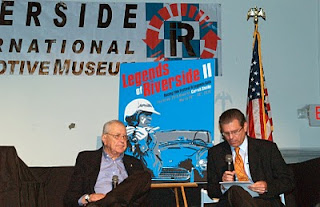 Ed Justice Jr. having an interview with Carroll Shelby

Carroll Shelby (the prime honoree) was the first signer in the line, and then other drivers sat down next to each other. So far, so good, but then they needed another table. There were too many drivers for the number of tables! Another table was brought in, and the same thing happened again, still more tables were brought in to fill the need for places that these driving legends could use to autograph personal mementos. Table after table was hurried into the room, such was the number of drivers. 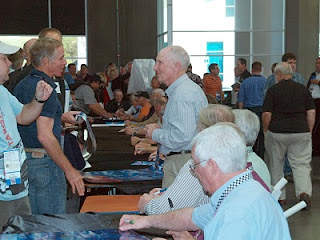 Autograph-seekers lining up to meet their driver-heroes.
Just when it looked that the situation was under control, even more drivers arrived! And not just any drivers, but Dan Gurney and Parnelli Jones, and others! Every unused table in the place was pressed into service, and some that were earmarked for other uses were re-purposed also. I gave up my display booth table to use for a trophy presentation, so they would have one more table to use. When no more were available, the drivers began to sit on both sides of the tables, and that's how it went. Everyone laughed about it, and it went off fantastically!
From the chaos, came one of the most fun events of my life. I will never see so many of my heroes together again, I'm sure, I feel very lucky to have witnessed it!
I will remember this until I die!
Rick Rucker has a FREE newsletter that teaches how to draw cars at: www.DrawingCarsisEasy.com.
He lives with his wife in Southern California, and started going to sports car races in 1953.
Posted by Automobiliart.com at 12:04