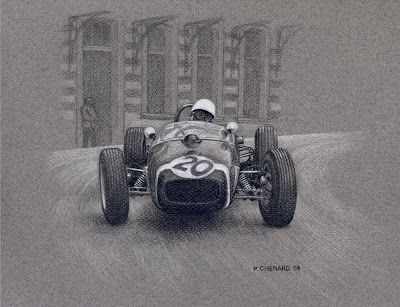 The Grand Prix de Monaco was the inaugural race of the 1961 season, which introduced new 1.5 litre engine rule.

Most teams, except for the Scuderia Ferrari team, were ill-prepared for the new season.

Sir Stirling Moss was racing a 1960 Lotus 18 F1 fielded by privateer team owner Rob Walker. This outdated Lotus was certainly not as sophisticated or as powerful as the Ferraris, but Sir Moss’ virtuoso driving skills more than made up for the disadvantage.

In a very hard fought, tight race, he finished 3.6 secs ahead of American Richie Ginther who drove the new Ferrari 156 “Sharknose”.

In the illustration above, Sir Moss rounds the Station hairpin.

The original sketch is Prismacolor pencils on Canson archival gray stock, 12" x 9". The original is available for $375 CDN (plus taxe).