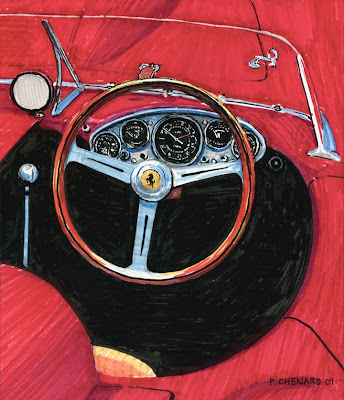 The Ferrari 250 Testa Rosa is a famous racer that helped propagate the Ferrari legend. The name comes from the Italian words for “red head”, reflecting its 12-cylinder engine’s red-painted cam covers.

The Testa Rosa were produced from 1956 to 1961. They were bodied by various carrozzerias, including Pininfarina and Touring.

Scaglietti created the famous “pontoon” fendered 250TR (Testa Rosas). 22 of these beautiful cars were built in the years 1957–58.

A few years ago, I wanted to create a unique clock, based on the 1957 Testa Rosa dash instruments. I bought a new retro-looking clock, took it apart and repainted the case and hands. I recreated the clock-face using the TR tachometer aesthetics, printed it out and covered the old face. Here is the result, which hangs on the wall of our computer room. 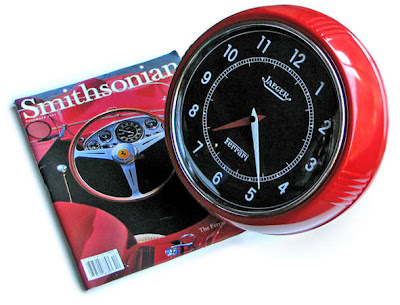 Sports Car Market reports that RM Auctions, in association with Sotheby’s, announced that it will be auctioning off one of these stunning Testa Rosa’s, chassis no. 0714TR, during their May 17, 2009 auction. You can read more about it here.
Posted by Automobiliart.com at 12:45

that looks great paul both painting and clock,i'm sure you could make a mint selling those clocks!

really love the painting... simple and classy.. will look even better if hang on a red wall...