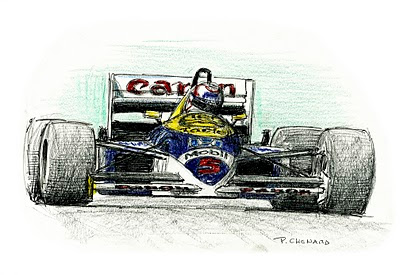 Pen&ink and Prismacolor sticks on white archival stock 12"x 9" © Paul Chenard 2011
He won five races in 1986, and finished 2nd in the Championship to winner Alain Prost.
His car was famously labeled with a red No.5, which was carried on his later Williams racecars.
Posted by Automobiliart.com at 12:50

Great drawing Paul, I remember seeing Nigel win his first formula 3 victory in 1979, Nigel was the best in the Red 5 FW 11 and FW 11B two championships slipped out of his hands one by a freak(ish) puncture in '86 and the second a result of a accident which gave him a spinal injury in '87 and meant he could not take part in the last two races of the season. Hey ho ! Nigel came back with a vengeance in 1991 and 1992 wearing the Red 5 on the FW14 and FW14B.